I have been living a low carb lifestyle now for about 3 months and it is honestly the best thing I could have done for myself. I started at 186 and am now down to about 160.

I haven’t followed the keto plan to the T, but I do keep my carbs to where I continue to lose. I only have a little more to get to my goal. I love this lifestyle and will do this for the rest of my life… 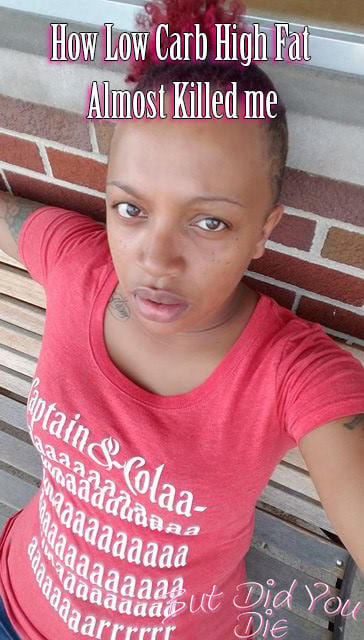 Now I know at this point you are probably thinking this chick is crazy, the title says one thing and she is now saying she loves it, wth.

Well here is how I almost died. I was craving chocolate, so I figured I would go to Walmart and grab some low carb candy, I grabbed some Atkins Endulge Pecan Caramel Clusters the serving size is 1 package, which contains 2 clusters. I ate one on my way out of the store.

It tasted like a child of God…. It was so amazing, like sex only it was happening to my taste buds. I felt like I had just struck gold.

I assume the craving is maybe because that is the time of the month that I am supposed to have my period, anyway, the craving got worse and worse.

I ate another the next day and the day after that I finished the box, Lord that was the worse idea of my life, I mean it was an even worse idea than my last relationship and that was a really bad idea.

I was fine most of the night, but, Jesus when I went to bed I could swear that there was something that had grown from that heavenly tasting candy that was trying to escape.

I remember it so well, it was the 4th of July and I could hear the fireworks faintly, it was only faint because my freaking stomach sounded like a mix between a bear, a lion, a tiger and a 2-year-old, kicking screaming temper tantrum. It was sooooo bad.

Eventually, I was able to block the noise of the fireworks and the punching inside my stomach out, until it hit me, and I am not talking figuratively. It was like Satan was in there and he was trying to get out. I get out of bed and practically break my neck trying to sprint to the bathroom. I make it and sit down and pray to God to take the pain away as I release the volcano that is in my bowels.

When I finished my mouth felt like Hanks looked after he took his meds in Me, Myself, and Irene. I had to drink some water, and pretty much died all over again, it was like the water reactivated the deathly diarrhea and I was praying all over again.

This went on for about 2 hours until there was nothing left to get rid of, until I ate the next day, it started all over again, the worst part is I was at work this time. I went on like this for a few days, everytime I ate or drank it reactivated whatever devil sugar substitute that was in these candies. I was so relieved and thanked the Lord when it was over!

I honestly should have known better after reading the Sugarless Haribo Gummy Bear Reviews On Amazon Are The Most Insane Thing You’ll Read Today, but 1 these were a different candy and 2 I thought, they are probably exaggerating… Nope, they aren’t.

Moral of this story, screw sugar-free candies, I will stick to my Iced Americano with heavy whipping cream and sugar free vanilla from Starbucks to soothe my sweet tooth.

I couldn’t figure out what was causing the explosion inside and outside of my stomach. I knew it happened every T.I. E I ate the Atkins pecan Carmel clusters. I also ate the same other Keto foods in the same day. I finally realized it was the candy after not having the other foods. They were good while they lasted.

LOL I love this post because it's so honest! Thanks for sharing!!

Congrats! I heard about that too and yeah we should be cautious as we don't know if it's really safe or not. Thanks for sharing!

Now this made me check my fridge as I knew I have sugar free candies. Will never purchase any again.

I avoid sugar-free candy like the plague. I had a similar experience to you and it's the most excruciating pain I've had in years. Never again!