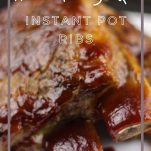 This Instant Pot St Louis Ribs Recipe was for sure a winner. Dinner was done in a little over super quick for 2 full racks of ribs. My spare ribs went into the pot.

I added in a apple cider vinegar, liquid smoke and a few other ingredients. Then, let them naturally release and when I removed the ribs they were fall off the bone good!

Pressure cooking makes life so much easier! I have also used this same recipe with baby back ribs. Its a versitile recipe and doesn’t only have to be used with St. Louis Style Ribs.

How Many Ribs Fit In The Instant Pot?

I have fit 2 slabs of ribs and honestly think I could have fit a 3rd smaller slab. The pot is pretty roomy so the key to adding more than 1 slab of Instant Pot Spare Ribs is to roll them so that they fit.

Spare Ribs In The Instant Pot

When you hear the pot beep, remove them immediately. Now you can add them to a baking sheet. First, put on a little brown sugar bbq sauce. I let them cook for about 15 minutes, or less under the broiler to allow the sauce to soak in some.

You can also adjust the time down to about 25 minutes because you are going to broil at the end.

This was my first time using my Instant Pot to make ribs. And other than throwing them on the grill in summer instead of the oven, and cutting the time when I do that, I probably will never cook them any other way again.

They stayed moist and fell right off the bone! And 30 Minutes, you can’t beat that, especially for Beer Braised Instant Pot St Louis Ribs.

What can I Pair Instant Pot St Louis Ribs with?

Really anything goes great with these ribs. I like to also have corn on the cob with my ribs.

As an Amazon Associate and member of other affiliate programs, I earn from qualifying purchases.

831 shares
Previous
Dream With Her and Sponsor Her Dream
Next
Cooking Healthy, Homemade Meals Every Night Is Possible Even When Life Is Busy
Click here to cancel reply.

These are truly the best instant pot ribs on the internet! I've tried a lot of recipes, believe me. My family can't rave enough. I put 2 pork babyback racks in my PPCXL, 6 qt. for 23 minutes, no trivet.. They weighed 2.88 lbs and 2.86 lbs. It's similar to an InstantPot. Meat setting. Thanks!

Just made these and delicious. Did leave them on high for 45 minutes as I like them to be close to falling on the bones.

Some of these questions are making my eyes roll up permanently. OMG!

I don't have a high setting on my new Multicooker. 'Spode I should just press meat button & reduce time to an hour, release pressure & stop at about 30 mins?